In what feels like an ever-changing regulatory landscape, IR35 is yet another addition to the evolving contract/freelance/off-payroll space. But, as we firmly advocate at Paybase, regulation should not be looked at as a deterrent. It’s put in place to protect consumers, workers and to help you as businesses to strengthen and future-proof your offering as well as creating a fair, level playing field for those in the market.

IR35 affects off-payroll workers and their employers in medium and large organisations - those who are contractors as opposed to employees and thus do not pay PAYE. It is “a set of tax laws which form part of the Finance Act” and it is designed to cut down on tax payment discrepancies that have been historically common in off-payroll work.

As many of our clients operate businesses that work with freelancers, contractors, locums, gig workers and more, it’s important to understand the implications and, if necessary, make as much time as possible to prepare. Crucially, it’s important that your business model is clearly defined.

Deemed employment is where employers use contractors to work exclusively for their company on a self-employed basis rather than hiring them on an employment contract. It affects disguised employees as opposed to those who are genuinely self-employed. Disguised employees often work for an intermediary - “a Personal Service Company, Recruitment Agencies, and all Large and Medium-sized end clients” - through which they are paid as opposed to invoicing a company directly. They fill a permanent position in a company but don’t pay the corresponding income tax and National Insurance contributions (NIC) that a permanent worker would. 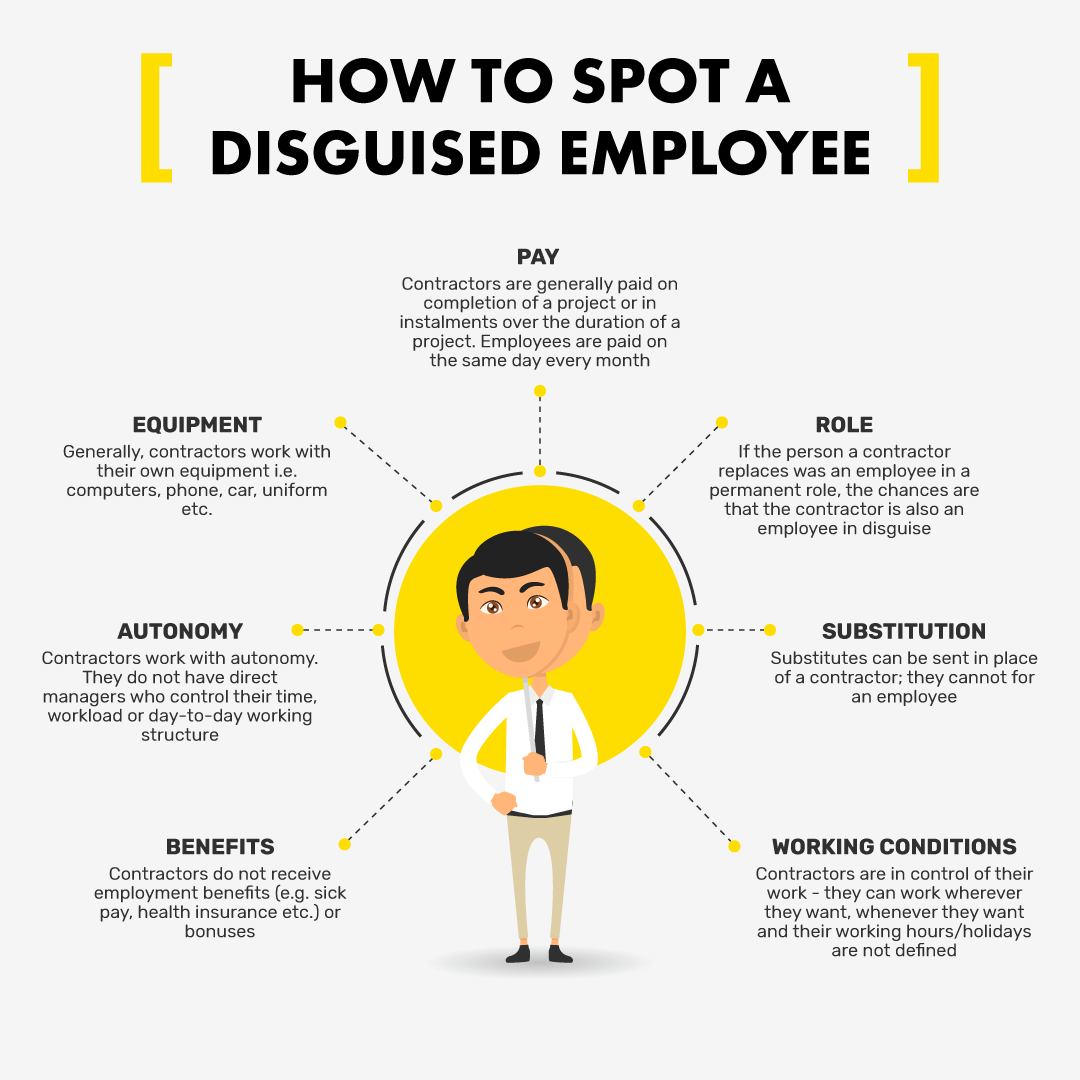 IR35 legislation has been in place since 2000 but was heavily criticised for being poorly implemented. In 2017, new, stricter off-payroll rules were introduced in the public sector and they will be pushed into the private sector on 6th April 2020.

From April 2020, employers of medium and large companies will be liable to declare their contractors and their rates and they will be penalised by HMRC if they don’t. For many disguised employees, this could cause an up to 20% pay cut once employers have deducted income tax and NIC from their regular pay.

In order to define who falls inside IR35, a worker’s status will be tested based on three main principles, among others - control, substitution and mutuality of obligation. 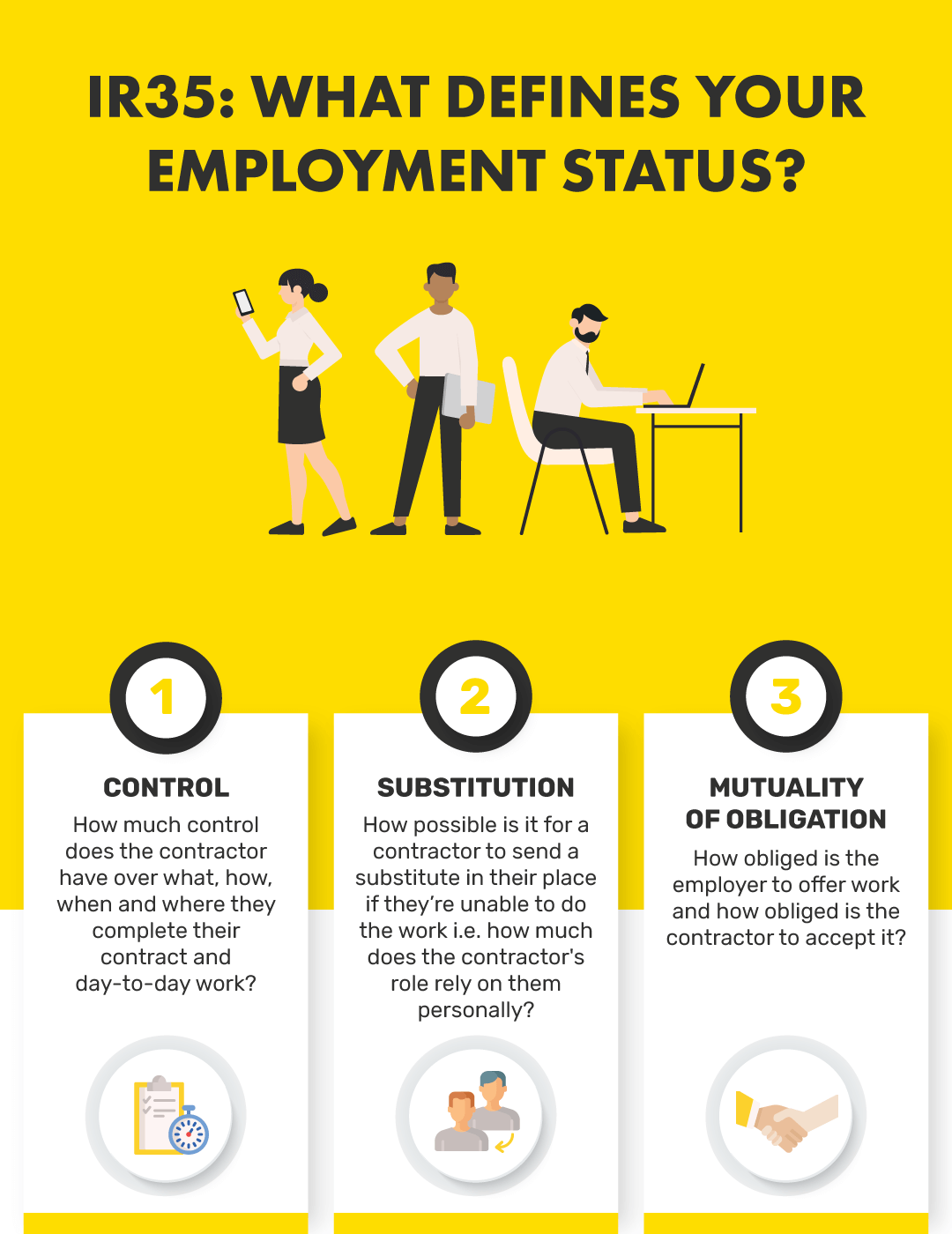 What does it all mean?!

One possible implication of IR35 will be the saturation of the permanent job market before April 2020. For the many who are misusing the infrastructure of off-payroll work (whether inadvertently or deliberately), there may be a rush from employers to fall in line and a rush from employees to find contracted permanent work. Those who work for small companies - those with 50 employees or less - are not included in the new rules, but that’s not to say that they won’t be extended.

However, for those who work with freelancers, contractors and those who are genuinely self-employed, IR35 is not a reason to panic. The regulations are designed specifically to target disguised employment in off-payroll work. The main thing to remember is that preparation is key. Make sure that everything is in order so that if HMRC come knocking, you won’t be met with surprises.

For more information on IR35, click here to read the HM Treasury fact sheet and guidance on gov.uk.

Want your platform business to be prepared for the future? Communicating your users’ tax obligations to them is a start, but innovation exists to go far further. Businesses such as online marketplaces or gig/sharing economy platforms, known as ‘plat...

Recent regulatory changes may have assisted the growth of RegTech, but is separating it from FinTech really necessary - or wise? RegTech is an industry based on the use of new technologies to help companies meet regulatory requirements in an optimi...

Read moreRead more
GDPR – What You Need To Know

If you were not aware, Europe is set for its biggest data protection shake-up in 20 years. From May this year, the General Data Protection Regulation (GDPR) devised two years ago will be enforced. It replaces the EU-wide 1995 Data Protection Directi...